DIY Halloween props are fun to create, but they can take hours, days, weeks, and perhaps a little longer to create when you can’t imagine the final product.  So, when you start with an idea for a Halloween Prop, think it through, draw it out, list the materials you will need, then… go to work!

We have been working feverishly on getting our Cemetery Columns and Sign completed before Halloween.  We can’t even imagine the hours we have spent on this project, truly don’t want to know either, but we really really wanted to create an entrance in the driveway for the trick-or-treaters to walk through.

We started with an idea, drew it out on paper, made some corrections to the design as some of the things that we came up with we could not figure out how to actually make it work, then once we had a solid idea, we started constructing the columns.  We used all the same size boxes to create the columns and started taping them together with masking tape.  (we did not want to use the shiny shipping tape as we were unsure if the spray paint would adhere to the tape)  We took four boxes to start and taped them together, then made another four and taped them on top of the first four, and kept doing this until we had a good height to our columns.  Ours ended being over 6′ tall for each column.

Once the columns were completed and taped together, we used some more boxes and added a “cap” to the top of the columns to finish them off, then taped the cap to the column.  Now, you have an unfinished column made from all the same sized boxes.  Next, we primed the boxes with gray primer and let that dry, then once dried, we sprayed a Krylon Make it Stone over the primer to make the columns look like sand stone.  Next, we added a round heavy-duty tube to the top of the cap and taped that in place, as this will be used to hold the actual cemetery sign above the columns.

Next, we had to work on the actual “cemetery” sign.  This part we had a lot of issues with because we could not come up with an idea that we agreed upon on how to “light up” the sign.  We tried adding purple rope lights but they were too dim and did not light up the sign, then we tried a black light tube and that did not work either as it too was not bright enough, so we actually found something that worked – LED white Christmas lights.  Now, that we know what kind of lights we were going to use, we went to work on creating the actual sign.  We gathered 4 of the same sized boxes again and taped them together in a row.  (we used 4 skinny boxes like a shirt box size for the sign)  Next, we cut  2 large letters out with an exacto knife in each box. (Box one: C E, Box two: M E, Box three: T E, and Box four: R Y)  Next, we spray pained the long box sign all black, both inside and out to give it an eerie look.  Now comes the difficult part, how to attach the lights inside the box.

Now, the only hurdle that had to be tackled was how to keep the columns and sign standing on Halloween night with the strong winds that normally appear around the witching hour.  Hmmmm, this one took some thought, but we finally figured it out.  Since we have all of that pressed wood around for our homemade wood tombstones, we made a wood base that the columns will sit on and created an inner wood column that we nailed to the base.  Now, the columns that we made out of boxes will just slip over the heavy wood base and will hold it up when the winds blow.  Nice!   The last thing that we will need to do is attach the sign to the columns and this will be done by drilling holes in those heavy duty tubes and one through the back of the sign.  Then we will add a long bolt and some washers and tighten it. 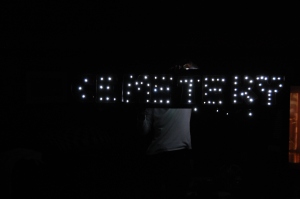 We have learned a lot by doing this project, as making DIY Halloween props is a lot of fun, but you definitely need to start on your project well in advance before Halloween so you can have it completed in time.  And, we used a lot of items that we already had on hand, a few cans a spray paint, masking tape, LED Christmas lights we already had, and a lot of imagination.  Our cemetery columns and sign will make a great addition to our home haunt this year!

What have you made for Halloween?  Share your ideas with us! 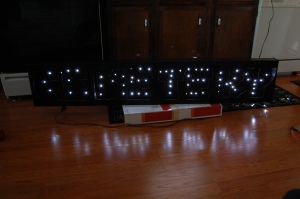