This edition of Pay It Forward is very special. A good friend of ours is a police officer in our town and his birthday was this past Sunday, which he had to work. We wanted to do something awesome for him on his special day and since we knew he was working, we went to work immediately on our surprise.

During the week, I hand drew a police car onto cardboard from a photo I took and tried to recreate this vehicle. It took a few times to get the portions correct, but I finally got it just right. 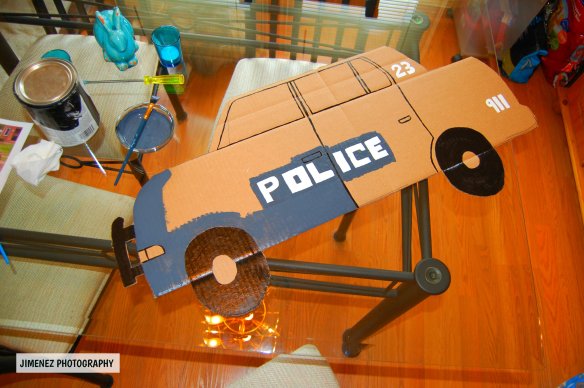 I went to work painting the cardboard police car and matching the gray color of the actual car. This was supposed to be a fun little gift for him that he would not expect. I got the windows painted, 911 on the back side, and even made sure that the front of the car had the push bar too! I think it turned out awesome for my first attempt. 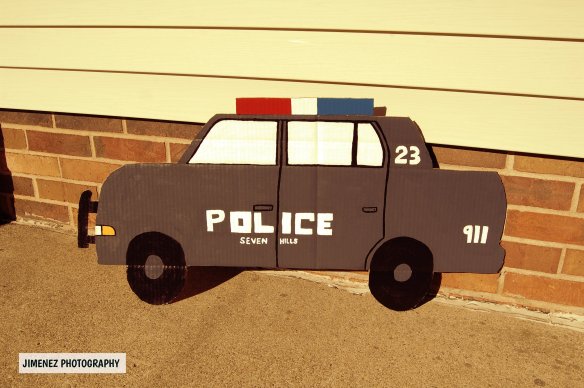 We also found out that our other friend who is on the force was working as well, and we decided that we would do something special for both of them. So, we pulled out the grill and cooked dinner for them! We made hamburgers and hot dogs, homemade french fries & beans for them for dinner. We texted them when everything was ready and they pulled up in front of the house to get their warm dinner. These guys were so appreciative of our generosity, it was overwhelming!

Before they left to eat, we handed them both a brown bag filled with snacks and something to drink while they continued on with their shift. I even wrote on the banannas in their bag too “backup pistol”! They chuckled when they saw that!

We take care of our guys in blue because they risk their life everyday on the job keeping our town safe, and we want them to know that we appreciate all that they do.

But, before our friend left we handed him the hand painted cardboard police car, a gift basket with birthday presents, balloons, and even a cake, which he picked up after work. 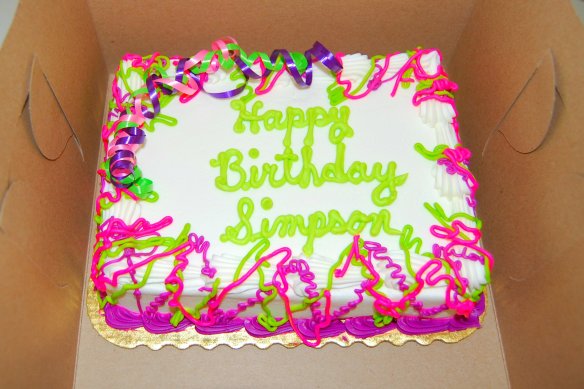 Paying It Forward is really fun to do because the look on their faces was priceless.

A great big thanks for our friends over at Pig Love for being involved in the Pay It Forward program with us, because without them, none of this would be possible! What have you done to Pay It Forward?

17 thoughts on “Pay It Forward”