February just started, but the dreariness of winter has taken over.  The case of stir craziness of being cooped up in the house has already happened.  Being able to head outside without being all bundled up from head to toe seems like a dream right now – – oh, I miss those flip flop days.  And I found out over the weekend that nine inches is too much.  Too much snow, that is.

It was beautiful to watch it snow the entire day on Saturday, as it covered basically everything with that light airy fluffy snow, but within an hour or so, three or more inches fell, and it kept falling the entire day to approximately nine inches in our area.  We are thankful that it was not a heavy snow because keeping up with clearing the driveway was a chore already.  I did though, by accident, find out that I could use our leaf blower to blow some of the snow off the driveway since it was fluffy, so that helped a lot with the snow removal, but I could not use it on the entire drive as I ran out of extension cord.  Rats.

So, what do you do when you are stuck in the house watching it snow?  You play with the dogs!  They enjoyed all the new fallen snow as they ran like Tasmanian Devils through the snow piles and came back in the house with their fur all matted and wet. Pure joy is what it was to them, but nap time quickly followed but not before Nikita beat up a butter tub really good. 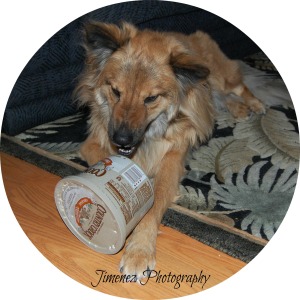 While the dogs napped, I took it upon myself to tackle yet another paper mache pumpkin.  This time, I am attempting to make an enormous one that hopefully we will be able to use as a prop for Halloween.  I took a large clear garbage bag and crumpled lots and lots of newspaper and filled up the bag.

Once I had what I thought was enough newspaper in the bag, I closed up the bag with some air still in the bag to help keep the pumpkin form.  After tying the top off on the bag, the next step to making a pumpkin is to pull a string around the form to make “indents” just like a regular pumpkin has.  Once you have enough indents, just tie off the string and you’re ready to start the paper mache process! 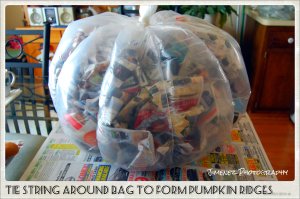 Just mix up some flour and water to make a pancake batter consistency and dip your newspaper strips into the batter.  Run your fingers over each piece of newspaper to remove excess batter and place on your form.  Starting at the top of your form, place strip after strip in different directions on the form until you get a layer across the top of your form, then work down the sides.  You will need to let the top half dry first before finishing the bottom half. 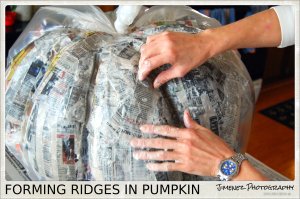 Once you get one layer done on your pumpkin, you will need to go over it again with a few more layers, drying each layer in between, until your pumpkin is nice and hard.  Just waiting for pumpkin to dry.  Making paper mache pumpkins takes quite some time from start to finish, and that is the reason I am making these this early in the year so I can have them ready for Halloween.  By the time the witching hour arrives, I should have quite a stock pile of them ready!

We had a nice weekend even dealing with all the snow we got, had lots of fun with the dogs, and even got some crafts done.  But, we have the best dogs in the world that bring us so much joy and happiness, even watching them play with a butter tub makes you chuckle.  Silly dogs. 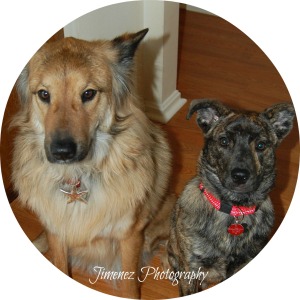 20 thoughts on “When Nine Inches Is Too Much”